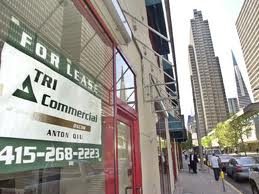 (Bloomberg) -- The delinquency rate on commercial-property loans bundled into bonds fell for the first time this year after climbing to records amid a wave of maturing debt from the boom years.

Mortgage payments more than 60 days late decreased 11 basis points to 9.34 percent in July, marking the first monthly decline since January, according to Wells Fargo & Co. Still, loans totaling $3.5 billion fell behind for the first time this month, the analysts led by Marielle Jan de Beur said in a report yesterday.

Borrowers who owe more than their properties are worth are struggling to pay off debt taken out during the real estate bubble with buildings’ values plummeting as much as 37 percent from 2007 peaks. About half of commercial mortgages packaged as securities maturing this month were able to pay off on time as boom-era loans failed to refinance, according to Barclays Plc.

Of 2007 loans maturing in the second quarter, 20 percent were able to pay off in full, down from 36 percent in the previous three-month period, according to Nomura Holdings Inc.

The delinquency rate may be leveling off as the majority of five-year loans from 2007 reached their maturity date during the first half of this year, according to JPMorgan Chase & Co. More than $13 billion in 2007 loans came due through June 30, compared with $3.8 billion for the rest of 2012, the analysts led by Ed Reardon said in a report yesterday.

The proportion of past-due loans may have started to moderate in June, according to estimates from Fitch Ratings, with late payments falling three basis points to 8.65 percent from the prior month. A basis point is 0.01 percentage point.