The man who will monitor the $25B mortgage settlement

(TheNicheReport.com) -- 3/14/2012 -- In light of the financial excesses that lead to the bursting of the American housing bubble and the collapse of the credit markets, the Obama administration and several state attorney generals have increased enforcement within the financial industry.

Joseph A. Smith Jr, the former commissioner of the banking industry in North Carolina, will be in charge of making sure that the nation's five largest mortgage lenders play by the rules. Mr. Smith has been appointed as the top oversight and compliance official in the settlement agreement signed earlier this year by Ally Financial (formerly known as GMAC), Bank of America, Citigroup, JP Morgan Chase and Wells Fargo. That deal, which is expected to cost the banks involved about $25 billion, will bring relief to hundreds of thousands of homeowners whose principal mortgage amounts exceed the value of their homes. Borrowers in such situations are often said to be underwater on their mortgages. 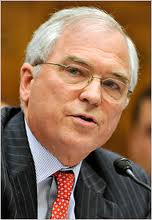 Who is Mr. Smith?

The former banking commissioner of North Carolina was once selected by the Obama administration to the post of Director of the U.S. Federal Housing Financial Agency.

(FHFA). Mr. Smith initially accepted the nomination, but later chose to discontinue the confirmation process after Republican members of Congress presented a politically-charged act of opposition. As a state banking commissioner, Mr. Smith was involved in a comprehensive foreclosure prevention program that benefited thousands of North Carolina households. Mr. Smith's Job Under the terms of the foreclosure settlement agreement, the five banks involved will have to overhaul their mortgage servicing operations, something that Mr. Smith will be reporting on a quarterly basis.

Should the banks fail to comply with the terms of the agreement, Mr. Smith has wide authority in making the non-compliant banks known to the public. Repeat violations could result in million dollar penalties. Since the settlement agreement aims to repair harmed done to individual borrowers, some who were unduly foreclosed upon and evicted from their homes, the banks will also have to report to Mr. Smith on their efforts in identifying and contacting affected homeowners. The banks are expected to be subject to tight scrutiny by Mr. Smith and his staff. If just one percent of the mortages evaluated by the bank return improper foreclosures, the banks will be fined. If five percent of the loan modification agreements requested by distressed borrowers were denied in error, another set of fines could be levied.