Shiller: Suburban Home Prices May Not Recover “In Our Lifetime” 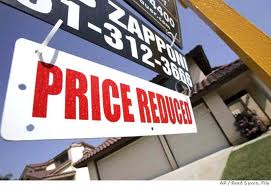 (Yahoo Daily Ticker) -- 3/27/2012 -- The battered housing market continues to struggle and talks of a housing bottom may be premature.

Home prices in January were flat compared to the prior month, suggesting stabilization in the market, but home values fell for the fifth-straight month and prices dropped to their lowest levels since 2003, according to the Standard &Poor's/Case-Shiller Home Price Index. Housing prices declined 3.8 percent on a year-over-year basis. The index measures the value of home prices in 20 U.S. metropolitan cities.

Sales of existing homes rose 0.3 percent in February and prices for new homes jumped 6.1 percent last month, yet demand for housing remains weak. There are 4.4 million homes for sale in the U.S.

Robert Shiller, a professor of economics at Yale University and co-creator of the Standard & Poor's/Case-Shiller Index, says the market has "a chance" of rebounding even though the downward momentum in the real estate market has accelerated in the past five years.

Shiller has become an authoritative voice on the housing market after making prescient calls about the housing bubble, before it burst in 2006. Before housing can bottom, the problems facing mortgage giants Fannie Mae and Freddie Mac must be resolved, Shiller says in an interview with The Daily Ticker. There is speculation that Fannie and Freddie could sell bundles of foreclosed homes to hedge funds; NPR and ProPublica reported last week that both Fannie and Freddie are leaning toward principal mortgage write-downs and loan forgiveness.

As economists and housing insiders continue to analyze every grain of housing data, most would agree that housing will continue to drag down the overall economic recovery in the near future. Many young people are choosing to live at home for a longer period of time instead of buying. Moreover, would-be homebuyers are settling into modern apartments and condominiums, further hindering a housing rally. Shiller says the shift toward renting and city living could mean "that we will never in our lifetime see a rebound in these prices in the suburbs."

A perpetually sluggish housing market, which Shiller believes has become "more and more political," might push the country in a "Japan-like slump that will go on for years and years."