Pressure Mounts on White House to Replace DeMarco at the FHFA 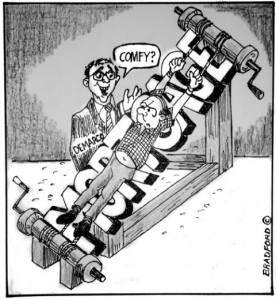 Edward J. DeMarco, acting director of the Federal Housing Finance Administration (FHFA), has been the most controversial government official in terms of the housing recovery in the United States. As the official with direct oversight of government-sponsored mortgage guarantors Fannie Mae and Freddie Mac, DeMarco is infamous for his denial to scores of American borrowers from participating in a home loan write-down program that could save them from the pitfalls of negative equity and foreclosure. Although many politicians and economy analysts have claimed that DeMarco is standing in the way of further recovery in the housing and mortgage markets, the White House has been at odds to actively replace him. DeMarco has been the acting director of the FHFA since 2009, and his term has been relatively quiet save for his notorious unwillingness to allow Fannie and Freddie to join a nationwide principal mortgage reduction plan. The thought of abruptly sending DeMarco packing was entertained in 2012, but the White House recognized that such a move may be seen as heavy-handed and politically disruptive. No More Waiting Around DeMarco has not hinted at stepping down since President Barack Obama took the Oath of Office for his second term. The White House has been looking at possible replacements, but the pressure to replace DeMarco is coming stronger from the President's own party. In a recent letter addressed to President Obama, Representative Elijah Cummings (D-Md.) and 44 other House Democrats strongly call for the immediate replacement of DeMarco. A hasty removal of DeMarco by recess appointment would be controversial and likely to be challenged by Republican Members of Congress. In fact, a recent judicial ruling in federal court hints that recess appointments may infringe upon the checks and balances afforded by the Constitution. House Democrats and consumer advocates would like to see something similar to a Presidential executive decision happen with regard to DeMarco, but the White House does not have too many options. It may all come down to political maneuvering, however, if Republicans decide to block appointments to the top FHFA post. The only motivation for them to do so at this time would be based on DeMarco's philosophy of avoiding further burden on the American taxpayers by blocking principal mortgage reductions of loans guaranteed by Fannie and Freddie. The U.S. Treasury unsuccessfully tried to entice DeMarco last year into looking at the use of financial incentives for the mortgage write-down program, but he declined based on his interpretation of an internal Fannie and Freddie study that showed the inefficacy of decreasing loan balances.