What Is Marketing Depth?

(TheNicheReport) -- I just reached 800 friends on Facebook.  Some of you are scoffing, and some are incredulous that I would have 800 people that would admit to being acquainted with me, and some are shaking your heads and saying “what on earth for?”  It is that question I would like to repeat to you, and to amplify.

So you have thousands of followers on Twitter and hundreds of Facebook friends.  What for?  According to Pew Associates research, the average Facebook user has 245 friends.  But according to Cornell, the average Facebook user has a lot fewer real friends, people they could call for a place to stay, or to borrow money; MUCH fewer.  How many do they have?  Two.

This mirrors what we see in business marketing and communications.  If you’re anything like me, you get three ads a day for how to gussy up our business on Facebook or get another 2,500 Twitter followers.  The emphasis is on breadth of communication, reaching as many people as possible.  Now, if your plan this year is to generate 1,000 mortgage loans, you might not have a lot of choice.  You’re either going to go big, or you’re not going to get there.  For the rest of us, who are comfortable (even a little excited) with a tenth of that production, perhaps we should focus on going in the other direction.  We should be marketing Depth.

What is marketing Depth?  It’s the conversation, not the contact.  It’s not handing someone a business card; it’s getting a card from someone, holding it in your hand, really reading it, and asking a question of the person that gave it to us.  It’s soliciting information from people and actually paying attention to what we get from it.  It is focusing outward, not inward.

The mortgage market is decent.  It’s better than it was, from a competitive standpoint.  But it’s not 2005 and it isn’t going to be, ever again (especially considering the direction Washington is going).  But the time it takes to do a loan is greater than it’s ever been.  There are more potential pitfalls to navigate, more deal-killers to dodge.  Successfully overcoming those things requires depth of relationship.  You have to know the people you’re working with and have a relationship that will survive the inevitable day when underwriting tells you it will be another week before they get to your file.

How do you develop that relationship?  How do we market depth?

We as humans used to do this instinctively.  We seek connection naturally.  When your five-year-old is jumping on the trampoline, they don’t say “text me!”  They say “look at me!”  They want what the gurus call “presence.”  Give them a part of yourself, notice them and pay attention to them.  Your borrowers – heck, your potential borrowers – want the same thing.

Even more, what we have to remember is that one transaction is worth a few thousand dollars to us; one fan is worth tens of thousands.  You cannot get a fan from posting rates to Facebook, no matter what you may think.  Fans are made by real interaction and outstanding service.  But think about the outstanding service you’ve had (assuming you’ve actually had some recently, which may not be so).  What did it consist of, beyond a real person investing time to make sure you got what you needed?  Was it any more complicated than someone investing some time in you?

Good service is what makes fans.  Good products are important, yes, but again, in this industry the product isn’t the money we lend.  That’s the same from originator to originator, within really small parameters.  The important difference – our actual product – is in ourselves.  That’s why they call mortgages a “service industry.”  Our product IS service.

We need to concentrate at least as much time on development as on prospecting.  I realize there are fewer measurable results here (at least on the surface), but it’s critically necessary to doing our jobs well, and there are ways to measure interaction as well as “friends.”  This is where networking lunches and client-appreciation barbecues – and really outdated tools like handwritten notes and an occasional phone call – do their stuff.  The modern world has forgotten this, but the average person still puts more faith in a handshake than a tweet.  Still, even with our excellent communications networks, more than 90% of word-of-mouth referrals happen offline.  No joke.

Social media channels have their place, and they bring you in contact with a lot of people.  How many of them are you having actual communication with, where you share with each other and allow a relationship to grow?  That’s the metric we should be paying attention to, not just how many followers we have.  That builds depth, and depth is what allows us to withstand storms.  In every deal, in every industry, in every era, the storms are inevitable.  Being broken by them, however, is not.

It’s not complicated.  But it requires time and effort.  You can still use social media, and in fact you probably should, but that’s the white bread of the deal.  Put some meat in that sandwich.  Pick up the phone. 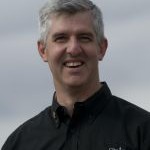 Chris Jones, branch manager with City First Mortgage Services, is a nine-year industry professional in brokering and banking, with a background in financial services, national politics and Main Street entrepreneurialism. He is the author of the forthcoming book, The Six Channels of Marketing, available in January. Chris lives in Lehi, Utah, with his wife, Jeanette, and their eight children, and can be found at www.lehimortgages.com, [email protected] or (801) 850-3781.