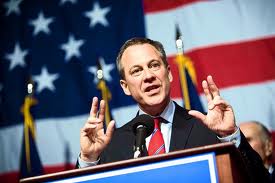 NEW YORK - Attorney General Eric T. Schneiderman today announced an agreement with Steven J. Baum P.C. (“Baum Firm”), Pillar Processing, LLC (“Pillar”), Steven J. Baum, and Brian Kumiega requiring them to pay $4 million to New York State in penalties, costs and fees, which will be used in part for programs that offer assistance to homeowners facing foreclosure or victims of predatory lending practices. The agreement stems from abuses in their foreclosure-related legal work. Baum Firm founder Steven J. Baum and managing partner Brian Kumiega also agreed to not represent lenders or servicers in new foreclosure-related cases for a period of two years. Until ceasing most of its operations on or about December 31, 2011, the Baum Firm was the largest foreclosure firm in New York State.

Between 2007 and 2010, the Baum Firm filed over 100,000 foreclosure proceedings and represented many of the largest servicers of residential mortgage loans, including Wells Fargo, JPMorgan Chase, Bank of America, HSBC and Citibank. Pillar was formed by Steven J. Baum in 2007 to handle the bulk of the Baum Firm’s highly compartmentalized foreclosure process. None of the Pillar employees were attorneys.

“The Baum Firm cut corners in order to maximize the number of its foreclosure filings and its profits,” said Attorney General Schneiderman. "This settlement demonstrates that my office will not allow New York homeowners to face the drastic consequence of foreclosure based upon inaccurate documents filed in court. Foreclosure law firms must ensure that their client has the authority to sue and is the rightful holder or assignee of the note and the mortgage before filing cases.”

Two million dollars of the settlement funds will be added to the $1 million already announced by Attorney General Schneiderman in January, to aid New Yorkers in foreclosure or at imminent risk of foreclosure.

Complaints were prepared in an assembly-line fashion by non-attorney Pillar employees with inadequate attorney supervision. Baum Firm attorneys also improperly verified and notarized these complaints. Attorneys routinely signed complaint verifications -- which stated, among other things, that the attorneys had read the complaints and knew their contents -- without reviewing the contents of the complaints or the underlying documents such as the original note or mortgage or any mortgage assignments.

During certain time periods, attorneys often did not see complaints after they were prepared by Pillar employees. Instead, attorneys pre-signed and notarized verification and certification pages that were subsequently attached to the complaints and filed with the county clerks. Even after the practice of attaching pre-signed and notarized verification and certification pages changed, attorneys continued to verify complaints without reading them. Until sometime in 2011, the Baum Firm also failed to properly notarize documents signed by its attorneys. Baum Firm attorneys routinely signed documents without being in the notaries’ presence, and when documents were signed prior to notarization, did so without the required oath being administered. Indeed, some notaries even notarized documents that were signed by an attorney who was not present in the state at the time the documents were notarized.

The Baum Firm also repeatedly failed to timely file the Request for Judicial Intervention (RJI) required to be filed in residential foreclosure actions and a court-required affirmation attesting to the accuracy of the foreclosure summons and complaint. New York Chief Judge Jonathan Lippman implemented the attorney affirmation requirement in October 2010 in response to revelations of widespread deficiencies in foreclosure filings nationwide, including the execution of affidavits without personal knowledge of the facts, a practice referred to as "robo-signing." The filing of the RJI triggers the scheduling of a settlement conference where potential loan modification options are explored, and also leads to notice being sent to local housing counselors that a homeowner is at risk of foreclosure so that counselors can reach out to the homeowner to provide assistance. Many homeowners were denied this assistance as a result of the Baum Firm's failure to file RJIs in a timely manner.

Rebecca Case-Grammatico, Senior Staff Attorney, Empire Justice Center said: “Empire Justice Center applauds Attorney General Schneiderman for his successful settlement with the Stephen J. Baum Law Firm and his continued support for advocates assisting homeowners facing foreclosure.  We truly appreciate that settlement funds from this case will be committed to providing much-needed funding for legal services to help correct the injustices in many of these cases which are still pending in the courts. We look forward to continuing to work with the Attorney General to deliver justice for the homeowners of New York.”

Elizabeth Lynch, Staff Attorney, MFY Legal Services said: "We applaud the Attorney General’s leadership in making these entities accountable to the people of New York State. For too long, foreclosure law firms like Steven J. Baum P.C. have wreaked havoc on homeowners, and this settlement sends a signal that New York State will not tolerate such improper conduct. But Steven J. Baum is not off the hook yet. MFY represents a class of people adversely affected by his deceptive practices and our clients look forward to vindication of their rights."

The Baum Firm, which the Attorney General began formally investigating in April 2011, has been the target of much criticism. Various courts have found that cases brought by the Baum Firm failed to adequately demonstrate the basis for the relief sought or that the legal documents contained an error. This past November, the Baum firm reported that it was shutting down its operations after Fannie Mae and Freddie Mac announced that mortgage servicers could no longer use the Baum Firm to handle foreclosures.

The settlement is the most recent part of the Attorney General’s comprehensive investigation of misconduct in the mortgage market. The Attorney General’s investigation seeks to hold banks and their agents accountable for their role in the foreclosure crisis, provide meaningful relief to homeowners and investors, and provide a full description of the facts to ensure that mortgage abuses of this scale do not happen again.

The Attorney General has taken a number of important steps in furtherance of these goals, including securing more than $130 million for struggling New Yorkers as part of a national settlement with the nation’s top five mortgage servicers and filing a major lawsuit against the nation’s largest banks and Mortgage Electronic Registrations System, Inc. for deceptive and fraudulent foreclosure filings. The Attorney General was also recently selected by President Obama to co-chair a federal-state task force investigating mortgage fraud.

New Yorkhomeowners who believe their homes were foreclosed based upon false or inaccurate documents filed in court should seek representation from an attorney. They may also file a complaint with the New York Attorney General's Bureau of Consumer Frauds & Protection by calling 800-771-7755 or visiting www.ag.ny.gov.