How the bank levy could end up hitting brokers

As Australia’s government indulges in another round of bank bashing, brokers could get caught in the crossfire, writes MPA editor Sam Richardson

As Australia’s government indulges in another round of bank bashing, brokers could get caught in the crossfire, writes MPA editor Sam Richardson

At 10AM the ASX opened and the bank stocks began to plummet. ANZ, CBA, NAB and Westpac were hit, as well as Macquarie: nearly $14bn was wiped from their share prices in total. This would all have made sense on 10 May, the day after the government unveiled a new 6 basis point bank levy, but the price collapse occurred on 9 May, nine and a half hours before the budget was unveiled.

Evidently someone knew the bank levy was coming, if not the banks themselves.

“This new tax is not a well-thought-out policy response to a public interest issue,” commented Australian = Bankers’ Association CEO Anna Bligh. “It is a political tax grab to cover a budget black hole.”

Although it is equivalent to just 0.06% of a bank’s liabilities, and affects only the big banks and Macquarie, the levy is expected to bring in $6.2bn over four years. The government says the levy will apply from 1 July, although it is less clear when it will end, or how the banks will pay for it.

Raising rates isn’t an option, according to Treasurer Scott Morrison. “Don’t do it,” he told banks the day after the budget. “Don’t confirm their worst impressions. Tell them another story. Tell them you will pony up and help fix the budget.” 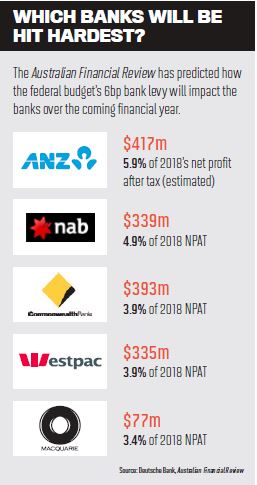 Rate rises and competition
Australia’s banks don’t appear to agree. Commonwealth Bank CEO Ian Narev has already warned that “higher costs are either passed on to customers through reduced service levels or higher pricing, or to shareholders through lower returns. There is no middle option to absorb costs.” While not explicitly stating they’ll raise rates, the other banks have made similar points to Narev’s.

Martin North, principal of research firm Digital Finance Analytics, made a similar claim when speaking to MPA. “Because the mortgage book is half of the total book you assume there would be a 15–20 basis points hike in mortgage rates, if they put it all through.”

Although the levy will only affect the big five, refinancing your customers with the nonmajors may not be the best option, North warns. “If the big four reprice their mortgages I’m pretty sure the regionals will follow anyway, because they need to do margin repair on their books.”

Adelaide and Bendigo Bank CEO Mike Hirst and others in the non-major sector have welcomed the levy as a way to even the competitive playing field. Deloitte told MPA that concerns about competitors could dissuade the banks from making aggressive rate hikes. However, North says the non-majors still face a “significant competitive disadvantage” because of higher capital requirements.

Foreign-owned banks could be the main beneficiaries of the budget, according to the major banks. ING DIRECT and HSBC have the ability to raise funds from overseas while being exempt from the levy due to their small presence in Australia. Foreign-owned banks start from a low base, however: ING’s share of AFG’s lending was just 3.51% in February, while HSBC only resumed dealing with brokers in June.

“If the big four reprice their mortgages I’m pretty sure the regionals will follow” - Martin North, Digital Finance Analytics

Unscrambling the egg
Standing between major bank borrowers and higher rates is the ACCC. Morrison has tasked the ACCC with forcing the banks to explain future rate changes and ensure they don’t use rate hikes to pass on the levy.

Unfortunately for the Treasurer, explaining rate hikes is “like trying to unscramble an egg”, says DFA boss  North. “I think it would be impossible to identify which elements of funding, or the levy, would be responsible for moving prices up or down. There’s a whole host of reasons why, outside the levy, prices will continue to rise,” he explains. International funding is still expensive; the banks are still hindered by overly cheap loans from last year; APRA is forcing them to reduce interest-only lending, and, finally, capital requirements continue to increase. At the end of the year APRA will publish a paper which North expects to recommend raising rates and consequently rates on mortgages.

Therefore, says North, “we have not seen the end of the mortgage rate hikes”.

“There is no middle option to absorb costs” Ian Narev, Commonwealth Bank

Impact on brokers
The government’s bank bashing could end up hitting brokers.

“This levy comes at a time when bank earnings and profitability are already facing multiple headwinds,” warned credit ratings agency Moody’s, pointing to moderate credit growth, low interest rates and rising capital requirements. Coupled with further scrutiny of vertical integration by the Productivity Commission later this year, the banks have the incentive to take radical action.

Banks could save billions of dollars by cutting broker commissions, according to UBS. The investment bank claims that the cost of brokers is rising and accounted for 23% of the cost base of the major banks’ personal/consumer divisions in 2015.

Analysts Jonathan Mott and Rachel Bentvelzen wrote: “We estimate mortgage broker commissions add 16bp per annum to the cost of every mortgage in Australia, irrespective of whether the mortgage was broker or proprietary originated.”

Following the ASIC and Sedgwick reviews the banks will start to lower commission rates over the next few months, the analysts have predicted. “While mortgage brokers are unlikely to be happy with this outcome, we believe there is little they can do,” they said. Competition between banks would keep interest rates low, however, and “offset the additional repricing expected by the banks as they adopt the new Bank Levy”.

Sedgwick’s review gave the banks until 2020 to enact its recommendations, without explicitly recommending cuts to commissions. The consultation period for responses to ASIC’s review closed in June, making it unclear how banks would radically change commissions in time for the implementation of the levy on 1 July.

Whatever the outcome, the budget has created a $6.2bn reason for Australia’s banks to start making changes.