All eyes on interest rates

The Governor of the Reserve Bank of Australia is insistent that the cash rate will not increase before 2024, but economists at the major banks are predicting earlier movements

Despite the assurances of the Reserve Bank that the cash rate will not rise before 2024, economists at Australia’s major banks have been predicting hikes as early as next year.

Mortgage brokers, too, are expecting rate increases. A recent survey by mortgage broker platform HashChing showed that 55% of brokers believe rates will rise in 2021. The survey also showed that close to 60% of brokers see interest rates as the reason borrowers come to them.

In a research note, Commonwealth Bank head of Australian economics Gareth Aird said he expected an initial rate hike of 15 basis points in November 2022, followed immediately by another hike in December, which would take the cash rate to 0.5%. Three more rises in the first three quarters of 2023 would bring the cash rate to 1.25% – “the level at which we assess the cash rate to be neutral”.

ANZ economists have also forecast early rate rises, although within a slightly later time frame than CBA predicts. ANZ is expecting the Reserve Bank to increase the cash rate in two steps in the second half of 2023 to take the rate to 0.5%.

Westpac chief economist Bill Evans also predicted the RBA would hike interest rates at least a year earlier than the central bank’s own forecast of 2024, before adjusting his sentiment due to high household debt and anticipating a peak of 1.25% in 2024.

Some commentators have not entirely agreed with the predictions, however. Digital lender and payment provider WLTH’s CEO and co-founder Brodie Haupt said CBA’s forecasts were “fairly extreme” in light of the recent COVID factors at play in Sydney and Melbourne.

“Dare I say it, that COVID could potentially have some positive effects in this scenario by delaying the aggressive cash rate hikes that have been predicted, from a consumer’s perspective,” Haupt said.

The potential of a cash rate increase could be a positive thing for digital lenders and non-banks, he added, as it would provide the opportunity for them to take market share from majors by educating their customer bases on the positive use case for fixed rates.

“By offering long fixed rate periods [we can] help customers reap the rewards of increasing rates,” he said, “which is contrary to the fearmongering the majors convey in a market where interest rates are coming down by making large marketing pushes to lock customers in on fixed rates before the market bottoms out”.

CreditorWatch’s May Business Risk Review showed that the economy was “losing some momentum”. The research showed that credit defaults had increased by 9% against the three months to February, and external administrations had risen by 24%.

While the outlook is more positive than it was one year prior, there is emerging fragility off the back of the end of JobKeeper.

“We’ve been saying for some time we won’t be able to get a true picture of the economic health of the nation until federal government stimulus measures, such as JobKeeper, have ended and their impact has stopped artificially propping up some businesses,” CreditorWatch CEO Patrick Coghlan said. 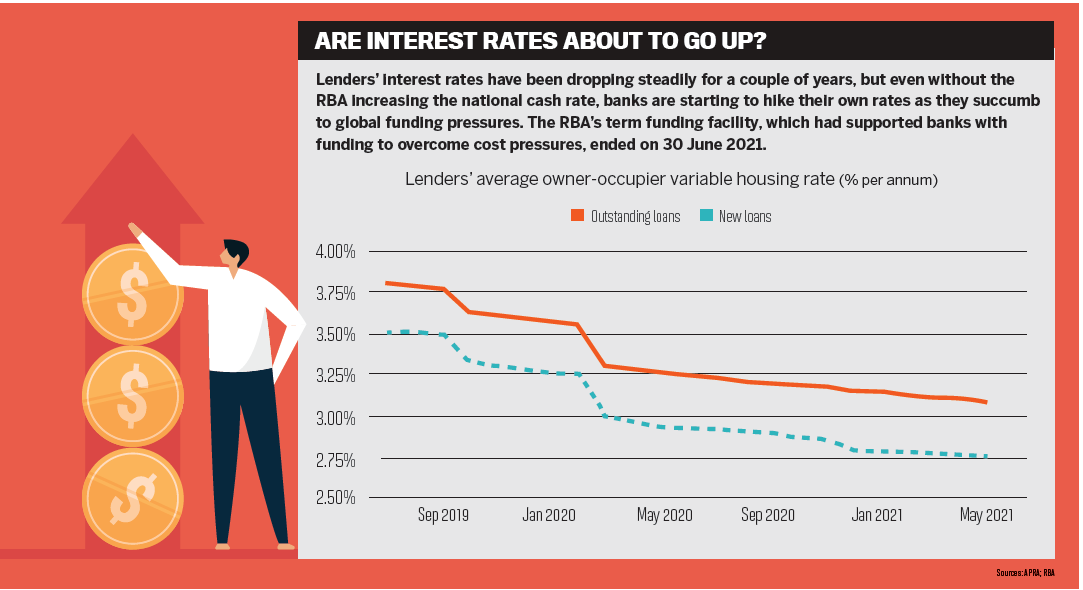 Speaking after the RBA’s decision on the July cash rate, CreditorWatch chief economist Harley Dale said speculation was running wild about when the central bank would increase rates, but he said we should “not get ahead of ourselves”.

“There are holes in the ‘how good are we doing’ headlines, and that includes a share market that is more vulnerable than seems to be the focus that it deserves,” Dale said.

“Right now, nobody knows when circum-stances will become appropriate for interest rates to rise, and that includes the RBA itself.”

Although economists are talking about rising cash rates, APRA has been preparing for a negative cash rate.

The regulator began a consultation in mid-July, asking the banks to ensure their systems could cope if negative interest rates should occur. The Reserve Bank has said a negative cash rate would be extremely unlikely, but in its introduction to the banks, APRA said that “does not preclude the possibility of a negative cash rate in the future”.

Whether rates go up or down eventually, RBA Governor Philip Lowe continues to stick by the bank’s 2024 prediction. In a recent speech, he said inflation would need to be sustainably within the 2–3% range before changing interest rates.

“It is not enough for inflation to be fore-cast in this range. We want to see results before we change interest rates,” he said.

“For inflation to be sustainably in the 2–3% range, it is likely that wage growth will need to exceed 3%.”

Explaining that the current rate of wage growth was materially less than 3% and was expected to lift gradually, Lowe added: “We … expect that it will take until 2024 for inflation to be sustainably within the 2–3%  target range.”