Is history repeating itself?

Australia weathered the GFC, but it was a stark warning sign. Did the country learn its lesson?

Australia weathered the GFC, but it was a stark warning sign. Did the country learn its lesson?

“People will be very perplexed when I say this, but I think the GFC happened at the perfect time for Australia,” says Mario Rehayem, Pepper Money’s Australia CEO, reflecting on the 10-year anniversary of the crisis that shocked the world and reshaped the global economy.

It was around 2007–08 that the Australian banks started to dabble in subprime or no-doc lending, he says. It was this type of risky lending that was one of the main contributors to the downturn in the United States.

“We only just started to get a taste of it in Australia and then the GFC hit, and that’s a blessing in disguise,” says Rehayem, who was working in WA as the state manager for Westpac at the time. “Many will say, ‘You’re mad’, but the reason why we were very resilient through the GFC was because of the good credit that Australia has always applied through the banking system.”

Australia weathered the GFC better than most countries, but it was a warning sign of what can happen when lending standards drop and borrowers get in over their heads.

The GFC did have a lasting effect on the way some mortgage brokers and banks operate today. Some lenders vanished, while others were acquired by the major banks, such as St. George and Bankwest. Since 2007, the number of ADIs has dropped 32% from 217 to 147, largely because of a decline in credit unions and building societies.

“Credit is not something that you can go obtain like a cheeseburger and chips; it’s a serious proposition” - Brett McMurrick, mmf Finance and Consulting

The GFC also underscored the responsibility both brokers and banks have for making sure that history doesn’t repeat itself.

Back then, lenders weren’t probing brokers for information like they are today, so it was much easier to get a loan across the line no matter the amount requested. 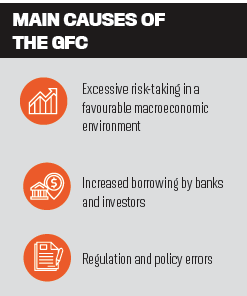 “There has clearly been an increasing understanding and following of the ‘Know Your Customer’ principles. Whilst I always felt most brokers did this, the need is now far greater to have a structure to properly record your clients’ responses – and to ask more questions to really get to know the back story of why the borrowing is being considered and what the strategy is to repay the new debt,” says nMB’s managing director, Gerald Foley.

Brett McMurrick, principal at mmf Finance and Consulting, says that while brokers felt the effects of the GFC, the royal commission will have more of an enduring impact on the Australian lending landscape and brokers’ day-to-day jobs.

He sees this as a good thing – it will bring greater levels of transparency to the industry, it will protect consumers, and it will flush out flyby operators.

“Credit is not something that you can go obtain like a cheeseburger and chips; it’s a serious proposition. You’re spending a lot of money, so there needs to be a lot of thinking and due diligence around credit applications,” McMurrick says. “This isn’t a game; you’re dealing with people’s livelihoods.”

Did Australia learn its lesson?

As much as lending criteria has tightened, some industry experts have sounded the alarm on the increasing toll of household debt and the banks’ high concentration of mortgages. As at September 2017, housing loans made up more than 42% of ADIs’ assets and were worth about $1.6trn.

“As someone who has watched debt ballooning for many years, I’ve become more and more concerned that we are laying a trap which could catch out a significant number of people,” said industry observer and Digital Finance Analytics principal Martin North in a recent video. “Yet the banks continue to say their mortgage loan portfolios are just fine … despite the revelations from the royal commission.”

According to his firm’s research, close to a million of the 3.5 million owner-occupier mortgagees are struggling with cash flow issues “due to flat incomes, rising costs and higher mortgage repayments, meaning that ahead there is a risk of higher default”.

Not everyone shares this view. “Prior to the GFC there seemed to be a view that the trees would grow to the sky – this clearly can’t happen – and a correction occurred. This time around lending has been more conservative, with greater emphasis on understanding living expenses and other financial commitments,” Foley says.

“People will be very perplexed when I say this, but I think the GFC happened at the perfect time for Australia” - Mario Rehayem, Pepper Money

The current market doesn’t raise any concerns for Smartline broker Sally Richards either. “It is our job to educate our clients and ensure they have a good understanding of what the market is doing and not be frightened of what they hear on 60 Minutes,” she says.

With lenders employing more realistic measures of people’s living expenses – which Richards says was long overdue – and the presence of lenders mortgage insurance, she believes the market is stable.

“If anything, [the lending policy changes have] been positive for broking, as clients are realising that they can’t just ask one bank what they can do for you – all the banks will give you a different answer. While one might say no, there is very likely one that will say yes – and we can help them find it.”